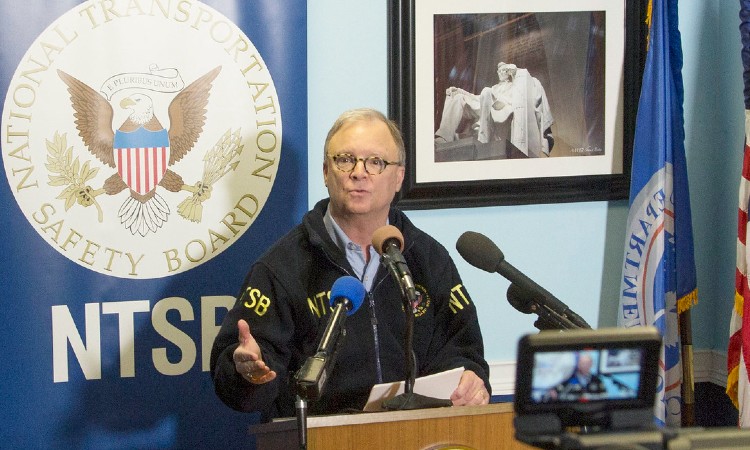 Vice Chairman Bruce Landsberg will serve as the acting chairman until a new chair is confirmed by the Senate. President Biden nominated NTSB Member Jennifer Homendy May 20 to become the 15th chair of the NTSB.

Sumwalt’s tenure as the 14th chairman of the NTSB began in August 2017 after being nominated to lead the agency by President Donald J. Trump and confirmed by the Senate. He was renominated for a second term as chairman in August 2019.

“The NTSB’s role is extremely important: by conducting thorough investigations, our work helps prevent accidents and crashes, reduces injuries, and saves lives,” said Sumwalt. “I’ve been honored to be part of this great agency, and to have served with the dedicated men and women of the NTSB.”

During his tenure at the NTSB, Sumwalt responded to 36 accident sites in all modes of transportation, including;

In addition to leading the agency and advocating for the adoption of hundreds of safety recommendations the NTSB issues each year, Sumwalt made a concerted effort to ensure staff had investigative resources and supportive leadership at all levels to make the organization one of the best in the federal government.

“I am proud that, by working together, we have increased our standing in the Best Places to Work in the Federal Government’s annual rankings,” said Sumwalt. “Our employee engagement is at all all-time high, and our internal communications have never been stronger.”

Sumwalt came to the NTSB in August 2006 with his appointment as the 37th member of the agency, whereupon President George W. Bush designated him as vice chairman for a two-year term. President Barack Obama reappointed Sumwalt to an additional five-year term as a board member in November 2011. He was reappointed for another term by President Trump in 2017.

Before joining the NTSB Sumwalt was a pilot for 32 years, including 24 years with Piedmont Airlines and US Airways, accumulating more than 14,000 flight hours. During his tenure at US Airways, he worked on special assignment to the flight safety department and served on the airline’s Flight Operational Quality Assurance monitoring team.