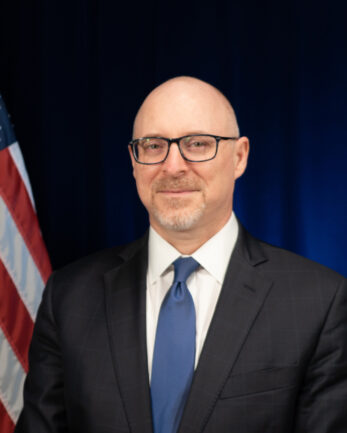 Aaron P. Forsberg is currently serving as the Charge d’Affaires a.i. to the U.S. Mission to ICAO (International Civil Aviation Organization). He is a career member of the Senior Foreign Service, class of Counselor, who entered the Department of State in 2001.

Most recently he served as Counselor for Trade and Economic Policy in the Economic Section of U.S. Embassy Tokyo in August 2020-2021.

Earlier, he served as Director (from January 2019) and Deputy Director (from July 2017) of the Office of Aviation Negotiations in the Bureau of Economic and Business Affairs in Washington, DC.  He was chief negotiator of the 2018 understandings with Qatar and the United Arab Emirates that addressed high-profile concerns certain U.S. carriers had raised regarding fair competition.  He also led or oversaw negotiations resulting in modern air transport agreements with Argentina, The Bahamas, Belize, Kazakhstan, and the United Kingdom (for after Brexit), among other agreements to expand rights to provide air services, such as new frequencies at Haneda Airport starting in 2020.  When the global Coronavirus pandemic hit, he devised the model for “commercial rescue” flights that enabled U.S. embassies overseas to work directly with U.S. and foreign carriers to bring home over 50,000 American citizens stranded overseas as borders closed.

Prior Washington, DC assignments include the Japan Desk, Office of the Chief Economist, and country Desk for Indonesia and Timor-Leste.  Mr. Forsberg has also previously served in Iraq, Japan, Thailand, and Qatar.  He speaks Japanese and French.

Before joining the Foreign Service, Mr. Forsberg conducted research on U.S.-Japan relations and published America and the Japanese Miracle (2000) on Japan’s post-1945 economic revival, also released in Japanese and reissued electronically.  He worked at the Tokyo Office of the law firm White & Case LLP and taught history in the University of Maryland system.  Mr. Forsberg graduated with a B.A. in History from Whitman College and a Ph.D. from the University of Texas at Austin.   He is married and has one daughter.