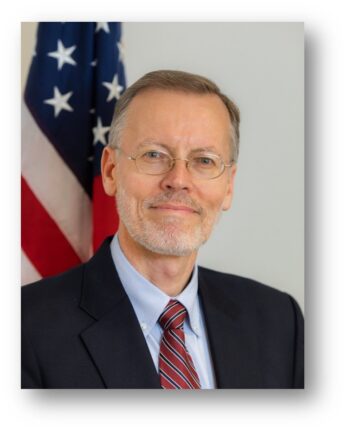 W. Brent Christensen assumed his current position as Chargé d’Affaires of the U.S. Mission to the International Civil Aviation Organization (ICAO) in August 2022. Before this assignment, he served as Senior Policy Advisor to the Asia-Pacific Center for Security Studies (APCSS).

Mr. Christensen has been in the U.S. Foreign Service for more than 30 years and has extensive experience in senior positions relating to China and Taiwan.  His most recent overseas assignment was Director of the American Institute in Taiwan (AIT) 2018-21.  He also served as Deputy Director of AIT 2012-15.  Before that, he was Director of the State Department’s Office of Taiwan Coordination.  He has served three assignments at the U.S. Embassy in Beijing, the most recent being Counselor for Environment, Science, Technology and Health.

Mr. Christensen’s other overseas postings include Hong Kong and South Africa.  He also served previous assignments at APCSS and as a Congressional Fellow for Senator Olympia Snowe.  Before joining the Foreign Service, he was a captain in the U.S. Air Force.

A career member of the Senior Foreign Service, Mr. Christensen holds the personal rank of Minister-Counselor.  He earned an M.A. in East Asian Studies from the George Washington University, a B.A. in Chinese language and literature from Brigham Young University, and a DMD degree from the Oregon Health and Science University.  He has received a number of U.S. Department of State Awards, including the 2020 Charles E. Cobb Jr. Award for Initiative and Success in Trade Development.  He has also received two honorary doctorates, one from the Sun Yat-sen University and one from the Kaohsiung Medical University.  He is a native of Provo, Utah.