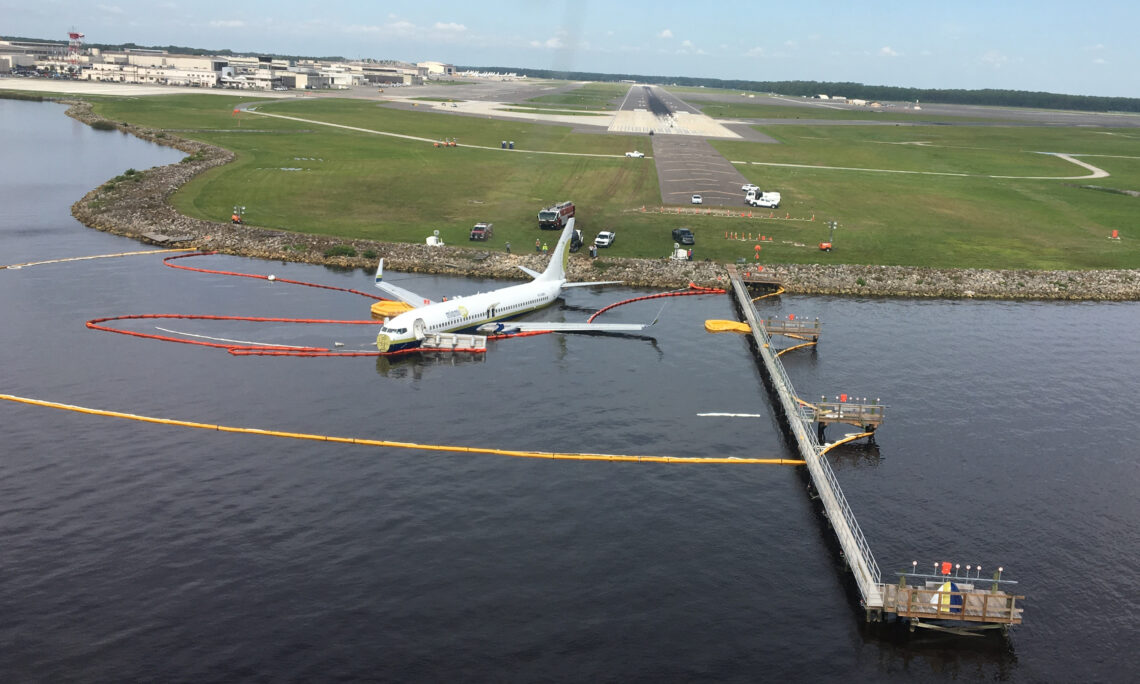 ​ (In this photo, taken May 4, 2019, Miami Air flight 293, a Boeing 737, is shown in the shallow water of the St. Johns River after departing runway 10 while landing in a rainstorm at Jacksonville Naval Air Station, Jacksonville, Florida. NTSB photo by Dan Bower.)

​Washington (August 4, 2021) — A jetliner overran a rain-soaked runway due to an “extreme loss of braking friction,” the National Transportation Safety Board said in a report released Wednesday.

Miami Air International flight 293, a Boeing 737 charter transporting U.S. Department of Defense personnel from Guantanamo Bay, Cuba, ended up in shallow waters of the St. Johns River after it overran runway 10 at Jacksonville Naval Air Station, Jacksonville, Florida, while landing in a heavy rainstorm May 3, 2019. Although none of the 143 passengers and crew onboard were seriously injured, several animals carried in the cargo compartment died in the accident.

The accident report details how the flight crew did not follow procedures, including continuing an unstabilized approach, landing the airplane at an excessive approach speed, and delaying deployment of the speedbrakes. However, investigators determined that even if none of those errors occurred, the airplane still would not have stopped on the ungrooved runway because the rainfall rate and runway characteristics contributed to water depths that caused the aircraft to hydroplane.

The accident docket, which contains interviews, photos, studies and other factual material, was opened to the public April 21, 2021, and is available online at https://go.usa.gov/x6GGd​.